Beata Malik, a beekeeper from Skorochów near Nysa, runs a bee breeding project in cooperation with Bioagra. In several dozen so-called mating boxes, standing at company’s premises, bees are preparing for mating flights. Classic hives, at which bess laboriously produce honey, are standing next to mating boxes.

The mother bee breeding program has now been running for the third season and brings very good results. New queens and their descendants, bee families, are gentle and hard-working thanks to proper breeding that enables proper gene exchange between insects.

The area that was made available by Bioagra is closed and monitored. Bees live peacefully and have a large supply of varied food under the watchful eye of cameras. Rapeseed fields, acacia, linden and forests are all within the range of flights of insects.

In such a favorable environment, young bee mothers are getting ready for their future role – the queen of the entire bee family. They stay in special hives, the so-called mating boxes. From here they set off for a mating flight. Young queens are replacing the old ones or are introduced into the hive in case the old queen dies.

– We were looking for an area where bees do not disturb people and people do not disturb bees – says Beata Malik, who runs an apiary. – Cooperation with Bioagra is perfect for the bees. The environment in which the hives stand is very clean. The company informs us in advance when works related to its activities will be carried out and we can rearrange the hives if there is such a need. 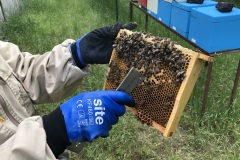 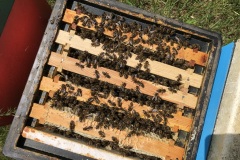 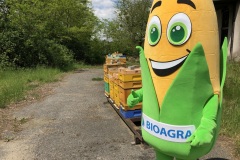 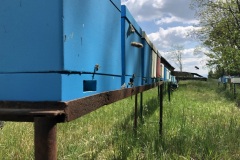 On one hand, Beata Malik treats cooperation with Bioagra as a support for local business, but also as an activity of great importance for bees as a species. In order to survive they need healthy, genetically strong queens that allow the insects to extend the species. In turn, people, thanks to bees, receive honey and something of extraordinary value. It is about the possibility of growing many plants that are a key link in the food production chain.

According to the United Nations, bees pollinate about 70 out of 100 crops that provide 90% of humanity. food. It is estimated that a third of food eaten by humans is created thanks to the fact that bees pollinate the flowers of various plants. “If the bees would disappear, humanity would not have survived four years …” – this statement, attributed to Albert Einstein, indicates the importance of the role of bees in the production cycle of food that we buy in stores.

It is estimated that about 470 species of bees live in Poland. Over half of them are threatened with extinction. As Beata Malik explains, bees currently don’t have enough places where they can live safely, reproduce and obtain food. Beekeepers have more and more problems with setting the hives. Like other breeders, e.g. cows, goats or pigs, they are often reluctant to be seen in inhabited places.